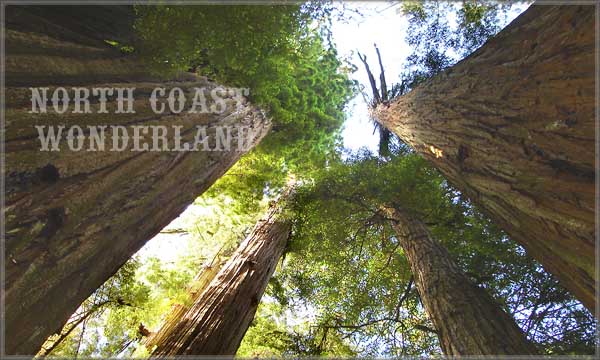 
This is a small glimpse into the many remarkable scenes & sights found in
California's northern-most coastal county, known as ~ Del Norte ~
That's the abbreviated Spanish nick-name for
"The Land of the North" (la tierra del norte) 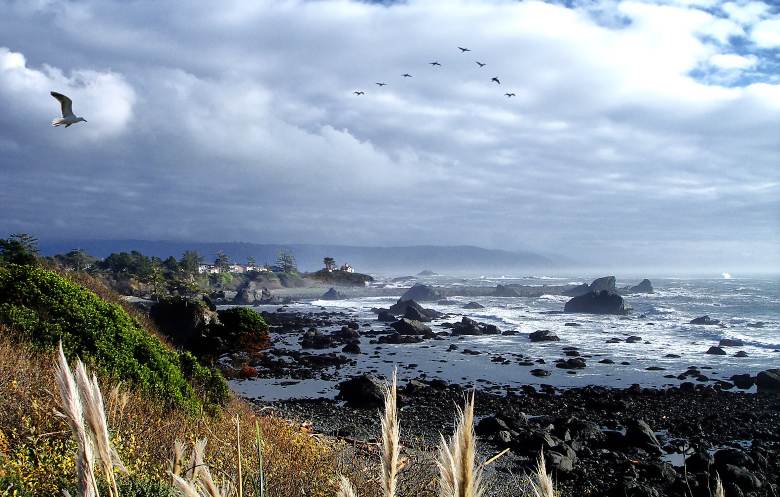 Besides the world famous Roger Patterson film of a female Bigfoot shot here, the area is also notable
for being the location for several big Hollywood movies filmed here, including the Ewok forest of
Moon Endor in Star Wars -The Empire Strikes Back.

Besides the Redwood forests, fern canyons, coastal dunes & wild rivers;
besides the bear and the elk, the owls and raccoons , the hawks, herons, and
sunbathing sea lions; there's the fishing and Jet Boating, the surfing and hiking,
camping, swimming, canoeing, kayaking, bird watching,
and the bi-annual visitation of the Canadian-Aleutian Geese and migrating-whales. 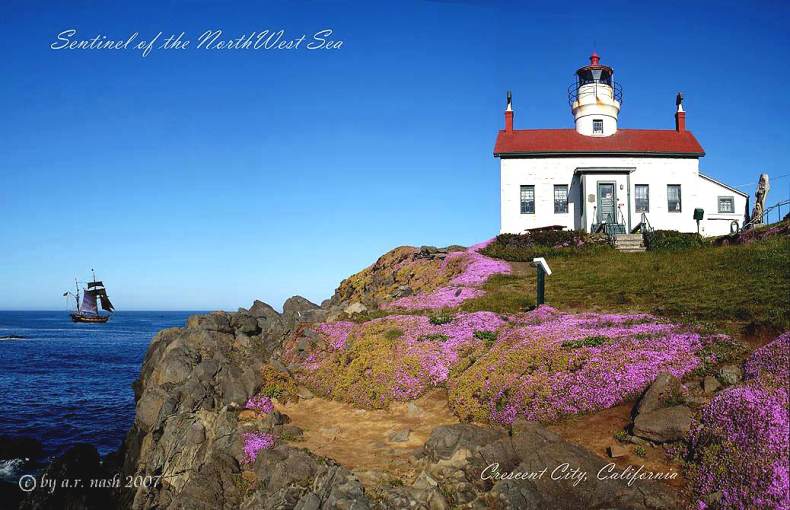 Rich in history, from the pioneering days of the California Gold Rush,
the wreck of the gold-laden Pacific steamboat known as the Brother Jonathan,
the building of a lighthouse 6 miles out on St. George's Reef, -and one
on the coast at Battery Point (built in 1856), through the logging &
saw-mill era, into the present era of dairy, farming, crab & salmon fishing.
Del Norte County has seen a lot of changes through the years,
including the wide devastation wrought on Crescent City by the tsunami
of 1964, but adversity has engendered ingenuity and a community "can-do" spirit.

Its past and present are beautifully depicted by over a dozen large murals decorating city buildings.

The weather is fair, the population is small but inter-connected through many associations
and alliances that foster social, artistic, commercial, and governance activities and programs.

There's the tourist destinations of many well-placed RV parks,
Trees of Mystery, Ocean World, two Indian tribe Casinos,
Redwood State Parks, and the Battery Point Lighthouse
Annual Del Norte events include the Sea Cruise Classic Car meet,
the 4th of July Fireworks Show near the Lighthouse
(one of the largest and best on the California coast),
The California Redwoods, Birds & Nature Festival,
the County Fair & Carnival, Farmer's Market
and numerous other cultural events year around,
plus the occasional visitation of the Lady Washington & Hawaiian Chieftain
(-vintage reproduction Sailing Ships) . 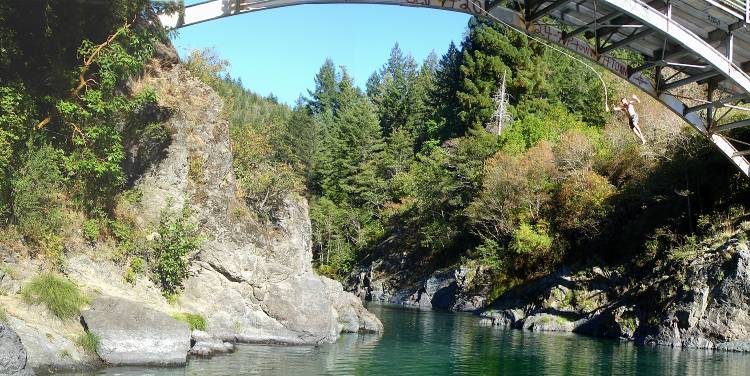 There are two scenic rivers -the Smith River and the Klamath River
which are enjoyed not just for water fun but also for salmon and steel head fishing
(with fishing guide boats available year-around). Del Norte is also home to the world's
largest lily farms (thanks to the rich soil and moderate climate) as well as commercial
crab fishing (often 10 million lbs. per season) and world-class cheese production.
CLICK on "View original size", then if the photo doesn't appear full-screen, click on it and it will.
Press your F11 key for the largest view of photos (or Full Screen in "View" at page top)

The Native American museum at Trees of Mystery on Highway 101 is just a few more mile south. It holds one of the largest privately held collections of Indian artifacts in the world. The museum is free and a must see when visiting the area. In the parking lot, you'll be amazed by the gigantic Paul Bunyan and Babe figures. Besides the strange arrangements of giant Redwoods, the Trees of Mystery also has an amazing Tramway that will take visitors up and above the giant trees as it climbs up to a mountain top.

This site is dncwow.com (Del Norte County World of Wonders)
aka: http://delnorte.wikifoundry.com/